Skip to content
Two weeks after I bought the Hero Thunder Racer, here I am finally, when I was able to try out the new bike first time. I thought I will share my experience, as well as solicit discussion on a few aspects I noticed. Please bear with the long note.
As a preamble, I have to mention that I intended to get a ‘good’ road bike, but due to some sudden developments decided not to spend a lot of money now. I intend to use this bike for probably 6 months to 12 months and upgrade (that is if I really stick to this sport!). So I don’t intend to upgrade a lot, unless it makes a lot of sense to do so, even if I use this bike for a short period.
I had not fully recovered from my illness during last two weeks, but couldn’t resist the temptation to join the ride from Hyderabad Bicycle Club yesterday morning at 5:30 AM. It has been inviting me to take out as I watched it all the fortnight. After reaching the point (me and my son), I realized the route included significant off-road ride, and the convener mentioned my road bike wouldn’t be suitable for some portions of ride and I would have to lift the cycle and walk during those stretches. So much to practicality of buying a road bike! In any case I was not ready for a 70 km ride yet.
So we rode off to the new express way road to airport. Overall I think we rode for about 28 – 30 kms. The ride overall was pretty good. I liked it. Nevertheless have to mention a few observations:
1. I rented a Merida 510 MTB earlier and rode on same road. So did make comparison as I rode through. Merida was a ‘lot more’ smoother in its mechanical movements – be it pedaling, wheel movement, gears, or brakes. There is a definite difference between a 30k cycle and a 6k cycle.
2. The ride had significant lengths of inclined roads, some steep enough to bother me. Surprisingly this was a lot easier to go uphill the inclined road than the Merida. Despite being thinner profile tires, I thought the Merida with its quality gears, and other mechanical movements, would be easier than the Hero. But pleasantly surprised that despite the larger wheels, the thin profile tires and high pressure air in the tubes seemed to have made a bigger difference :D.
3. The saddle was hopeless hopeless hopeless. My touch areas have become quickly VERY sore. I was literally [b]’scared to death'[/b] to sit on my bike today when I decided I should have at least a short ride. There was a recommendation yesterday to upgrade the saddle to a Merida one (thin profile used in road bikes). I am not sure, if it is really worth or necessary to upgrade immediately. Is it a matter of getting used to bicycling (for over 25 years, I have never touched one), or is it worth upgrading even if I may upgrade the whole bike in less than a year?
4. I had purchased biking shorts yesterday and used it today under my long pants (still embarrassed to go out without trousers!). I have to admit, it did feel better today. (I know the purpose is different for the padding).
5. It was easier to ride the Thunder Racer, but not sure if it was faster compared to Merida. I do have to admit though, at times I had to slow down for my son to catch up.
6. Overall did not get as exhausted as with the Merida, albeit the ride was not half as smooth as the Merida MTB
7. One of the most irritating experience has been the chain slipping all the times. I must have put it back at least over half a dozen times. I was not willing to agree that cheaper bikes can have these problems; can’t be so bad. Couldn’t quite conclude what was causing it.
* It happened when I was changing gears – either of rear or front
* It happened irrespective of what gear I was – front gear 2 or 3 (I did not use first gear) and different rear gears
* It happened when I was going downhill – even if at constant speed and not changing gears
* It happened when I was riding on flat road – even when I was not pedaling and not changing gears
* It happened when I just got on to the bike and pushed down the pedal
* One mechanic concluded I must have been in wrong combination of front gear 1 (smaller sprocket wheel) and also similarly in rear a smaller sprocket one – meaning cross chain movement and chain not being taut
* Any ideas or suggestions how I can fix this or the ride to avoid this? I can’t be fixing chain when I am riding to work 😦
8. After I returned home tired, I developed some body pains and some high temperature :(.
9. Today, when I rode up in a different terrain closer to home so I could accompany my other son, I realized it was full of beaten up road, muddy road, sandy, unfinished tar road and what not. Had to admit my bike was not fit for the road. Started wondering if it reality is that one should have a road bike as well as an MTB for different rides (for life is a mix of paths not one!)? I don’t agree hybrid is option. I think that will be a ‘neither of’ option.
Here are some shots of my new bike. [b]How do I get rid of the stickers? I hate them, and scratching is not helping[/b].
And here are some sample pictures: 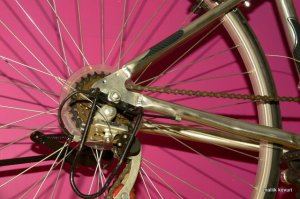 Comments and advise solicited to the new biker ::welcome
Mallik