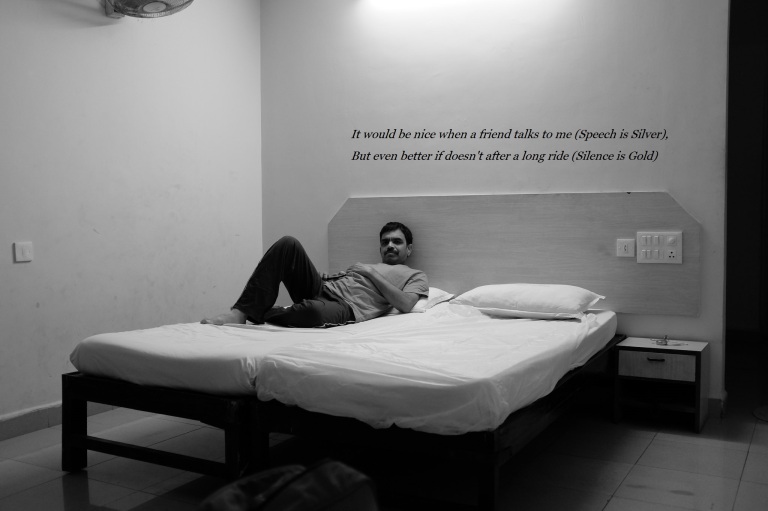 I always believed, like we wrote those essays during our childhood, ‘Pen is Mightier than Sword’. And so I do even today. Actually I correct myself. I ‘see’ more of that. Wars are fought ’cause someone somewhere did not speak well, nay, said wrong things or said right things wrongly. We see agitations aplenty because of these. States in India are split vertically because of several things said by several people, several times, endlessly.

Silence is Gold. No doubt about it. When we are silent, we start listening to our inner-selves. Our thoughts. We become inward looking into our body, mind and soul. There may be a lucky few who may even see God within themselves or find answers to some complex questions of the universe, as they meditate deeply, and long enough. But there is no denial that all of us find answers to at least some of our questions of day to day life. Not meditation by its commonly understood definition. But by just being silent and thinking. It is no exaggeration that world’s greatest inventions might have happened through thinking in silence. Talking helps us communicate to others by one medium. It succeeds the act of silence. Originality happens during silence. If wrong words are heard or said, these can only be corrected through thought provoking silence, followed by corrective words or lack of. So I guess it’s a no-brainer that ‘Silence is Gold’. I don’t need to elaborate further.

So why do they say if speech is silver? Well for one, if speech succeeds silence which is gold, then this ought to be silver. Let’s try to see more. And even more importantly, what do we do about it? A wrong speech made, a wrong comment or a wrong phrase uttered can have some greatest adverse effects. When we carelessly make a comment to someone even unknowingly, it can hurt the person for several hours. Sometimes days, years or even a lifetime. A loosely uttered word can never be taken back. It does not matter if we regret or even offer apology in some cases. So one cannot afford to have speech as iron or worse, plastic!

A normal conversation when we are not careful, could have phrases that get released unknowingly and hurt people. One may experience a completely unexpected, undesirable and incorrect interpretation of a phrase we said. And this is no different from something we might have said knowingly. The receiving person may still take it as a negative comment (despite it being an incorrect interpretation). And the repercussions are no different from what we discussed above. So it is very important that our speech be the most thought-out. The more we speak, the more it is likely that we would be less careful.

It is said that Mahatma Gandhi used to think a lot before he spoke. In fact in his autobiography, he himself mentioned that he became very conscious of what he spoke and used his words wisely and very scarcely. Imagine a political leader mentioning that he wanted to talk less! He even mentioned that he chose his words so selectively that he can’t think of one situation where he used one single phrase unnecessarily. When I was young, I read through some books on public speaking skills. Several examples were taken of accomplished speakers, Abraham Lincoln included who would develop several drafts before finalizing their speech and were very choosy in their selection of words. I am sure this is true with some of our current leaders too, political included. Atal Bihari Vajpayee, Narendra Modi included. And more recently even Rahul Gandhi. Despite their well thought out phrases spoken, we still see other interpretations made (or made out) of their intent. So however well we think, prepare and rehearse, speech is less likely to be Gold. At best it could only be Silver.

And that brings me to the conclusion of my thoughts on the subject. One, spend more time and effort on silence. It is Gold. It could be very valuable. The more thoughts age, the more they become mature and  therefore more valuable. Just like gold. It is better that we speak less to avoid potential slips in intent vs communicated. And if we do talk, let it be well thought out. Let us say things that make people happy. Let us say things when we want to get things done in a certain way. Let us say things when we want to communicate something useful to people. To help people. Or don’t say anything at all. There ain’t such a thing called ‘normal conversation’ which contains loosely framed sentences. Either think and talk, or don’t talk at all. Lest it won’t be even SILVER!

Epilogue: I am aware that some of what I write in blogs is a reflection of my emotions at that time. But emotions themselves are reflections of what happens over time repeatedly. They give shape to my thoughts. And I put them onto words; in a blog 🙂