I read an article in the newspaper, some 10 days prior to the ride. And I decided I was going to meet this person, in person and congratulate him for what he has done. Some 45 years ago!

The article goes on to say, there is a village called Annarigudem in Telangana near Suryapet, a haven for those wanting to run away from the concrete jungles of urban cities. The village has lots of greenery, thanks to an initiative taken by a man. Concerned with pollution, he encouraged the villagers to plant trees. He himself laid several of them, significant among them being a banyan tree at the entrance to the village. The author further says, there is at least one large tree in each home. I was humbled by this man who was concerned about pollution, forty five years back! And unlike people who talk more and do less, he actually did something about it. Thanks to the vision by someone so long ago, today the village is blessed with many trees, not plants any more for they now grew to a size that they can actually give relief to people in summer (and other times too with lots of oxygen).I decided, the least I could do as a good Samaritan is go and congratulate him for what he achieved. The only problem is, the village is 177 kms away from my home 😦 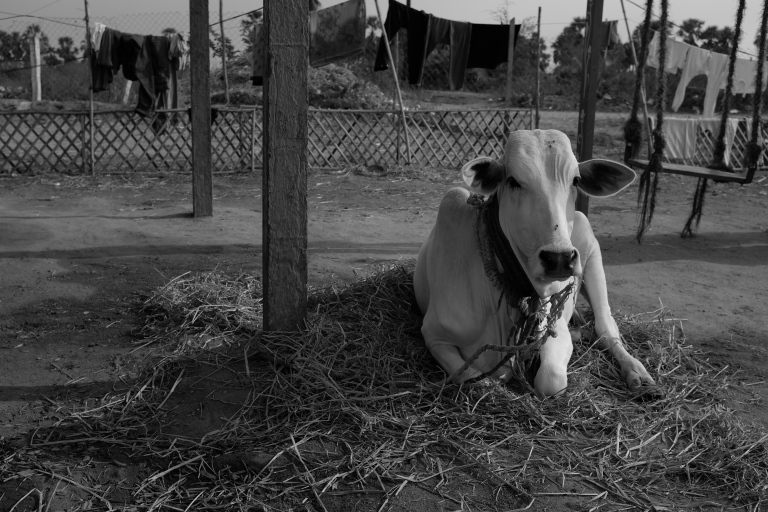 Come what may I wanted to go see the village and hopefully meet this person. I was prepared that media tends to exaggerate things and at the end, the village may not turn out to be that green or beautiful. Going by car is expensive, and not fun filled. Cycling would be nice. But I am not up that far yet to ride 177 kms, one way. Had it been 100 kms one way, I would’ve given it a thought. So by theory of reduction it’s going to be by my lovely Cafe Racer Continental GT! I call it my yellow beauty. 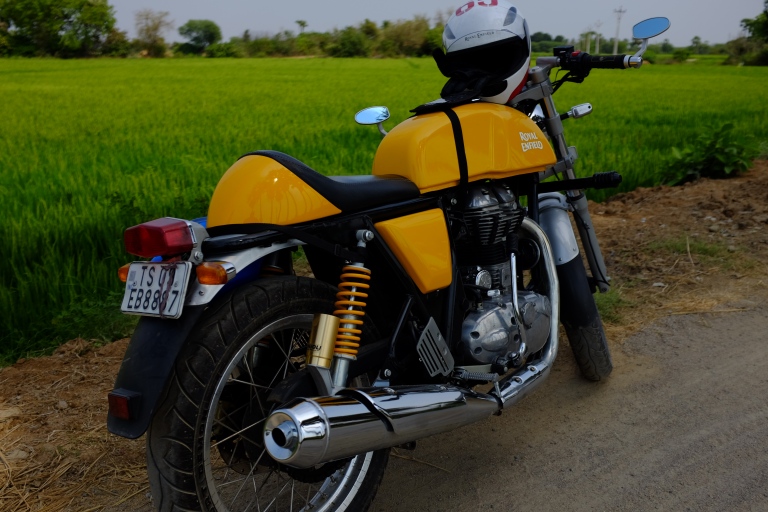 As it turns out, none of my motorbike colleagues were going to join me as each had their own plans for this weekend. So I decided to go solo . . . .  something I am not averse to should there be a situation. So here I am out past the outskirts of Hyderabad as the first light of the day breaks into our hemisphere. It is an awesome feeling to be on the road at that hour when even during this early hot summer, the breeze is cool. I would want to open up the visor of my helmet. Aaaah! Pleasant!!

Eventually I halt to make sure I tighten up my luggage properly that I hurriedly accomplished in complete darkness at my home when I started. To my horror, I saw my lovely ultra light weight totally waterproof fine bag that I imported directly from China (long wait on shipping), bruised itself to rear tire and cut itself! The mistake was I hung my hydration bag to the same hook on top of it thereby pushing the bag inwards to tire. I made the exact same mistake on an earlier long ride and my expensive camera bag tore. I excuse myself for making a mistake once, although I would like to be right first time, every time. But not making the same mistake twice. God! Why don’t we learn from mistakes? Same error happened last time also when I tied the luggage in total darkness and not checking well. The good thing is I didn’t lose contents. I managed to pull out some nylon belts and tie it well this time (also closing the open cut). 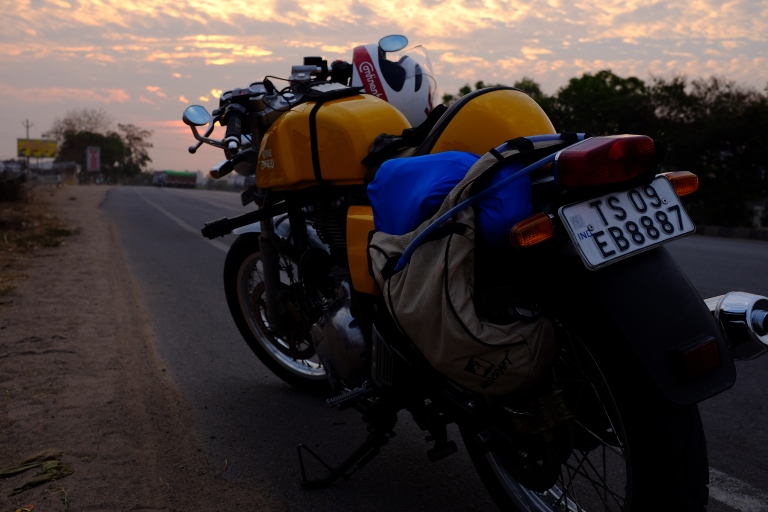 As much as I wanted to have some piping hot fresh idlies as an early morning breakfast, I hated the idea of stopping. So here I am finally at Palle Ruchulu (translated Village Tastes), an ethnic restaurant albeit more oriented towards non-veg even as breakfast. Had an ‘okay’ breakfast, a LONG telephonic talk with my friend, Ravi who was on his way to Srisailam who also stopped at the same time for breakfast. 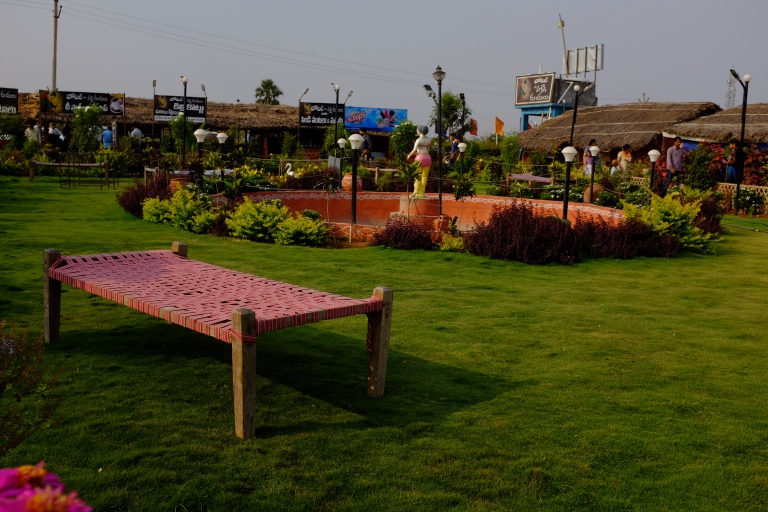 Partially (mis)guided by google maps on my phone and partially by locals, I got into an average tar road which later transformed into an excellent black top single lane winding road. It was encouraging to dive into high eighties but guarded by caution of unknown road, I limited myself to driving at 80 kmph or below. The road was clean with only a vehicle here and there, completely barren on both sides of the road. This gave me the opportunity to see the road ahead clear of traffic and obstacles. Needless to say, I freaked out 🙂 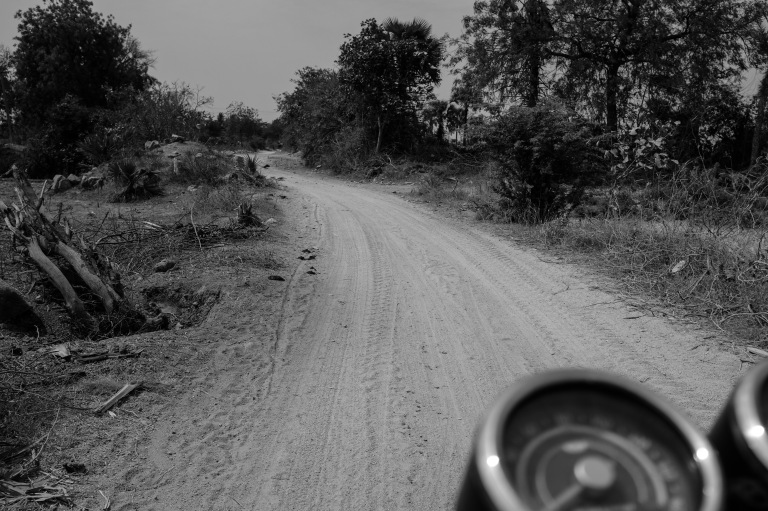 But after this came few bad patches of roads. To be followed by terrible road, nay just a muddy path ahead. At one stretch it had so many deep potholes that at no point of time were my both tires at same ground level. It became a roller coaster! Now I had to put to good use a particular theory session on off-road riding, I underwent some time back when I refused a practical. Notwithstanding some hesitation but concerned to save my weak back (I have a slip disc health issue), I rode the motorcycle standing on pegs instead of sitting on the saddle. There is a first time to everything! And after that you know it like the back of your palm. I started feeling safe to ride standing. There are several advantages of riding in a standing position on off-roads. I am not going into the technicalities in this blog post (I know it is of little interest to many). Too bad I did not take a picture of the road. Like I said earlier once I am on, I don’t like to stop and get down. I convinced myself into taking a picture during my return.

Am I having fun? You bet!

I wasn’t yet tired despite heat picking up. I was not thirsty either. And for an eventuality I did have my two plus liters of pot water hydration bag. And this experience today that I was having was so much fun and better than the training program I attended with Triumph Motorcycles. Sure I was having fun. Lots of! 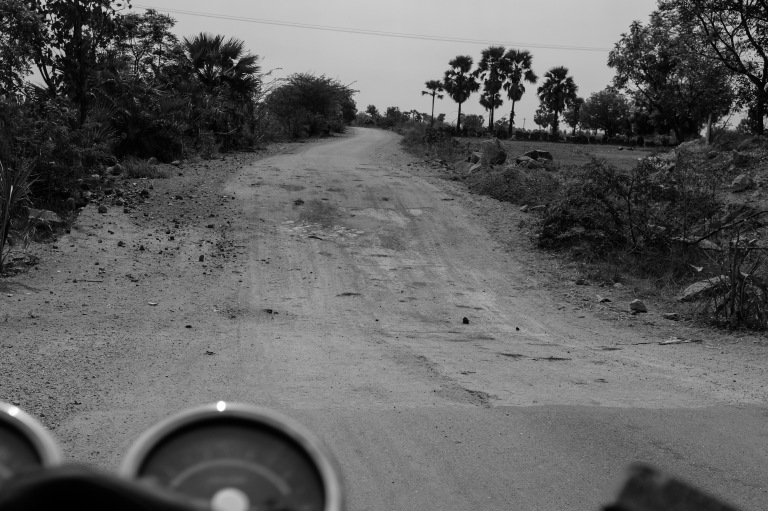 I went through small villages, sometimes just a hamlet. The sun was heading towards the top of open sky, and villagers did not dare venture out from their homes (I am a different animal, a little). At one critical junction when the road ahead was rather too narrow, nothing more than a decent walking path. I wasn’t sure if I was heading right. For all I knew, I could just end up ‘nowhere’. I had to ‘wait’ there until there was a passerby to inquire if I was on the right way, which he did confirm! Good news (I am on right track)? Bad news (pretty bad road ahead is the road I need to pass through)?

After couple of kilometers of horrible roads, here comes a beautiful black top road again. What a shame, I didn’t shoot a picture again hoping to find a better angle. This was a beautiful serpentine black narrow (single lane) road cuddling through villages as it passes. Like one long dark python snake making its way through rich woods. These newly laid roads were few inches above the ground level with a surface so flat that Hyderabadis’ will envy to their core. Guarded by villagers untamed to modern idiotic traffic, and potential to some children crossing the road at short notice, I reserved myself to only decent speeds, despite the inviting curvy jet black road. You should talk to a motorcyclist to understand that curvy lanes to him are as tempting as curves of a woman to a man!

If only I had taken a picture of the road, not waiting for a better angle, my caption for the picture would’ve been ‘If good roads mean progress of infrastructure for us the urban, then here is plenty of progress in the villages, thanks to the new state and new government’.

I was now halted by a battery of workers laying new road. The machine laying the road was as wide as the road itself. So there is no way I could overtake it by the road. That means I have to get down to the ground level (like I said, the black tar road was a few inches above ground level) to go past the machinery. The soil below was soft with few granite stones here and there. With a heavy motorcycle and my short legs this was not going to be easy. Well, I said to myself, there is a first time to everything. As I got down I now see a motorcyclist wanting to do the same thing from the opposite direction. I managed to let him know through my body language, first it was going to be me and then he comes. There is no way I am gonna make this more difficult. I waded through the loose soil with not much difficulty though it did slip once. And now I am off to another off-road leaving behind the beautiful black top serpentine road!

I go up quite some distance. On inquiry for re-confirmation of route, I am now told I was on the wrong way! Have to go back. And go past that construction machinery laying road. No worries! My first time was over. I could do this now without fear. Alas! The construction workers make me get down the left side of road where there are obstructions ahead. This means I have to patiently wait until the crawling machine finishes a stretch of road before I could get on. And this time, on to a level a few inches up and ‘into’ a wet (freshly laid) tar road. With the help of a worker pushing the bike from behind (as I was considering putting the engine in gear and walk with it), I got on to the wet road. Thank Goodness! My worries were proved incorrect. Neither the road was too soft despite just being laid, nor did the tar stuck to my shoes or tires. I was off inaugurating the new road 🙂 After traveling a distance, I stopped to re-check with a villager. Heck! He said I was in wrong direction!! 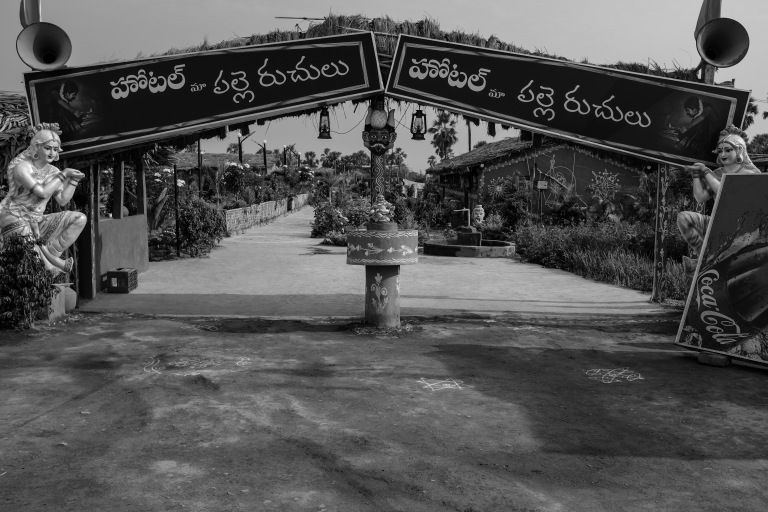 A drive to meet a great person, in person and congratulate, which turns into a decent adventure cannot be described in few words. What happened? How was my experience of wanting to meet a person who laid trees 45 years ago, not even sure if he is alive? How was the village?