The journey from the marriage event at Karimnagar continued and made it further memorable, exciting and also a little adventurous from then on, as you get to the end of this blog post. (You may read the part I of this Friday journey here)

Varma, my good friend and I did some web research, checked with bridegroom’s brother locally and concluded to see Elgandal Fort on our way back home. This was not far from Karimnagar, just being around its outskirts but in the opposite direction to our home.

I had earlier researched on a few alternative places to visit near Karimnagar, and this one in particular interested me for a unique reason. Its minarets purportedly can move, perhaps on heavy winds without breaking themselves. And I wanted to check it out if I could shake them by hand as well 🙂

So here we are at the entrance to the fort, a fairly majestic one. For some reason including this entrance the whole fort resembled a lot with Golconda fort at Hyderabad, to me. 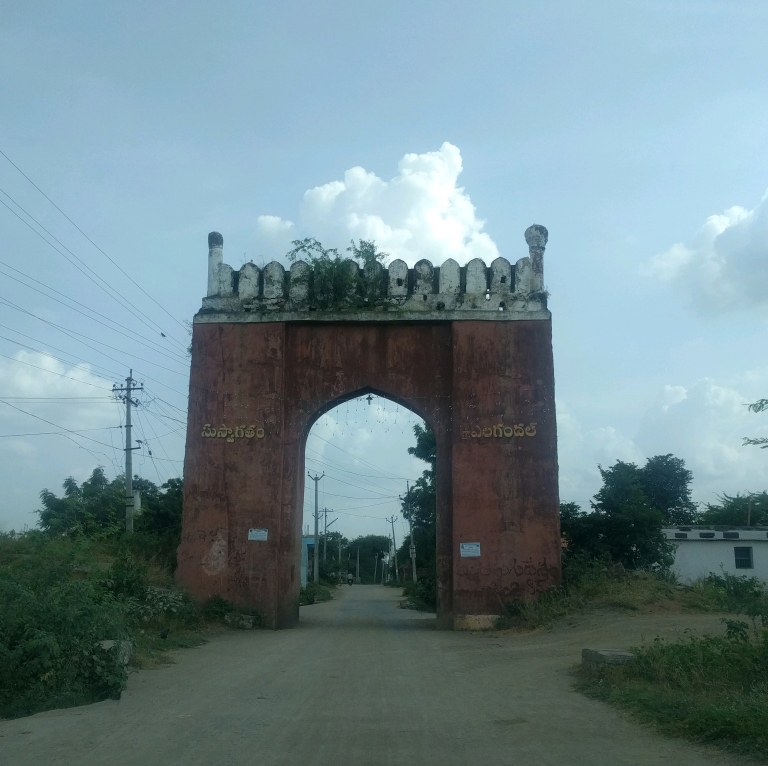 The fort itself is built on the cliff of a moderate size hill top. It did not seem an easy task to climb up, especially after a marriage meal and late mid day.

The place is certainly majestic with typical Nizam architecture, what with beautiful arches each opening into another. 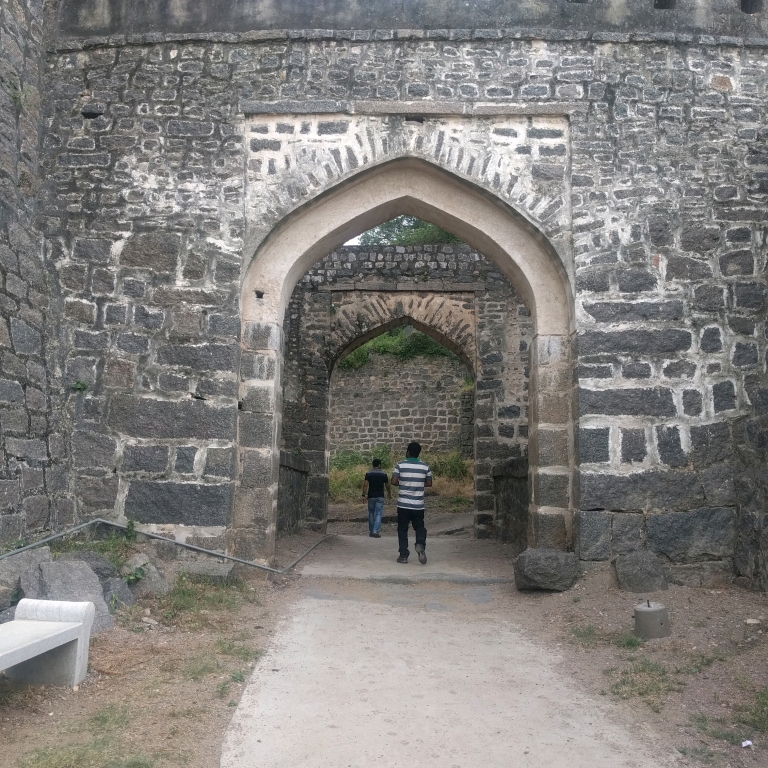 Don’t let the steps that seem easy at first deceive the difficulty. As we climbed up, we found subsequent stairs more steep, narrow and difficult. 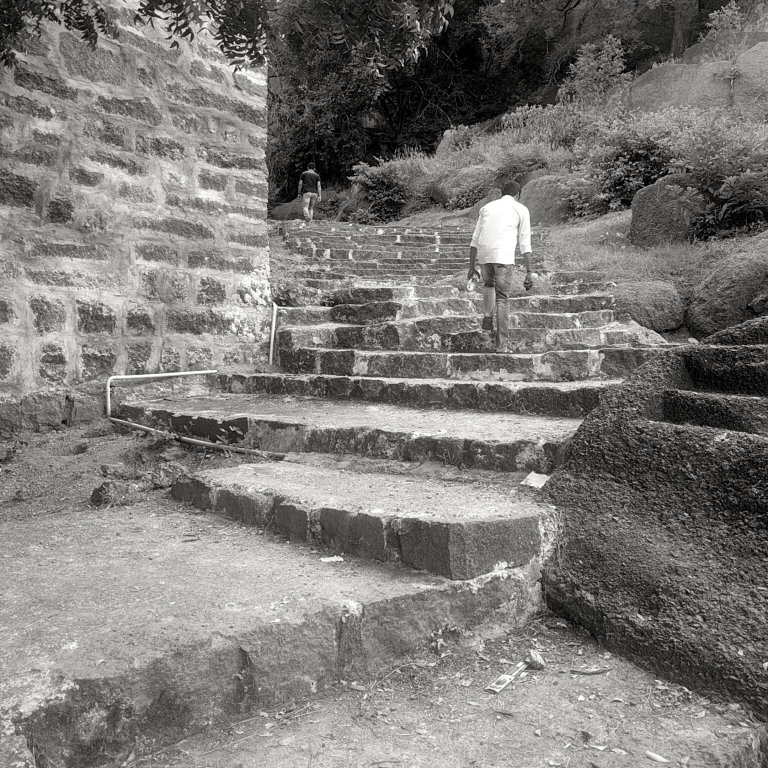 There is no dearth for Hindu temples in India. And there is a Hanuman temple right inside and atop the fort. There was also one another beautiful bright saffron colored Hanuman sculpture in an open area (not shown here). 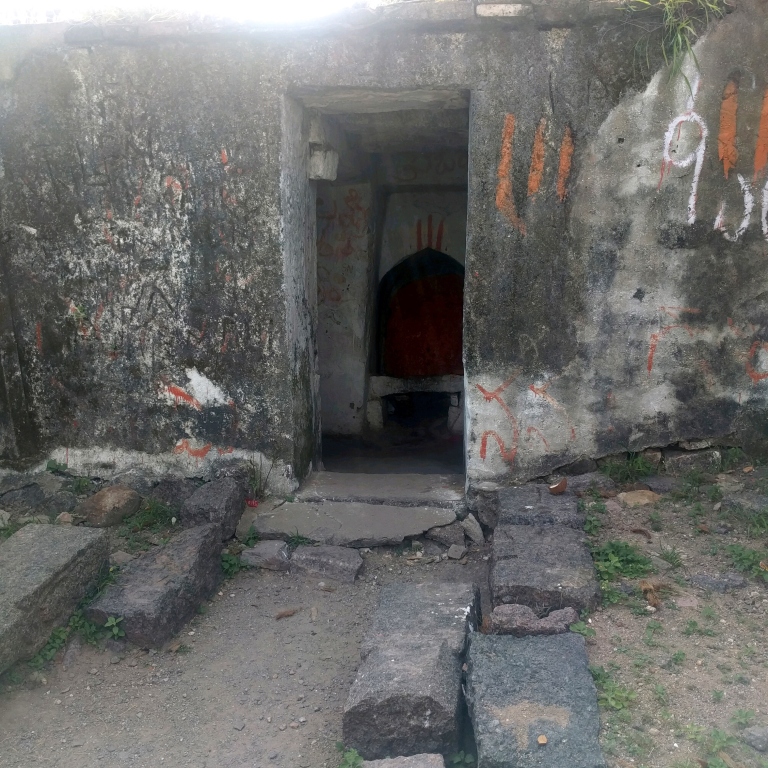 The last sections of the climb were a little difficult. Only 3 of us from our batch were able to reach atop. You can see how elated I am to have reached to the top, albeit sweating a little. Varma who reached well ahead (also benefited by not stopping for photography unlike me, who stops every now and then) is already relaxed by now. 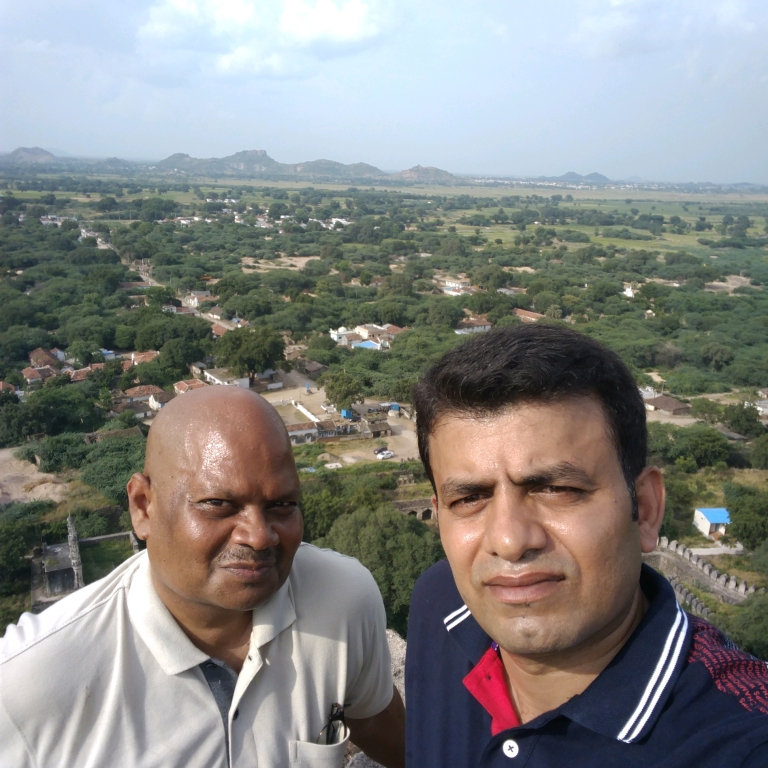 There was a bathing area with a small swimming pool, atop this hill and fort! We were told water was manually pumped up to feed the Misters and Misses of the royal family. I suspect the room adjacent was perhaps for the Begum saiba. It was a beautiful view from here into the forest.

This room was right below the main fort area for which there were some more steps to reach! The view from there was awesome. I couldn’t dare climb up the wall and check if the minarets could be moved by hand as I am quite scared of heights. Harivamsi (you can see him sitting on the cannon gun), from my project team clicked to include me in the pictures. I rarely have the luxury of having me in pictures. By this time, the battery of my phone died down, and I had to rely on my standby bar phone’s low resolution camera for pictures and put to test the theory, “it is the photographer behind the camera who makes the difference not the other way around”. Not an easy one to prove right, as you may notice below. 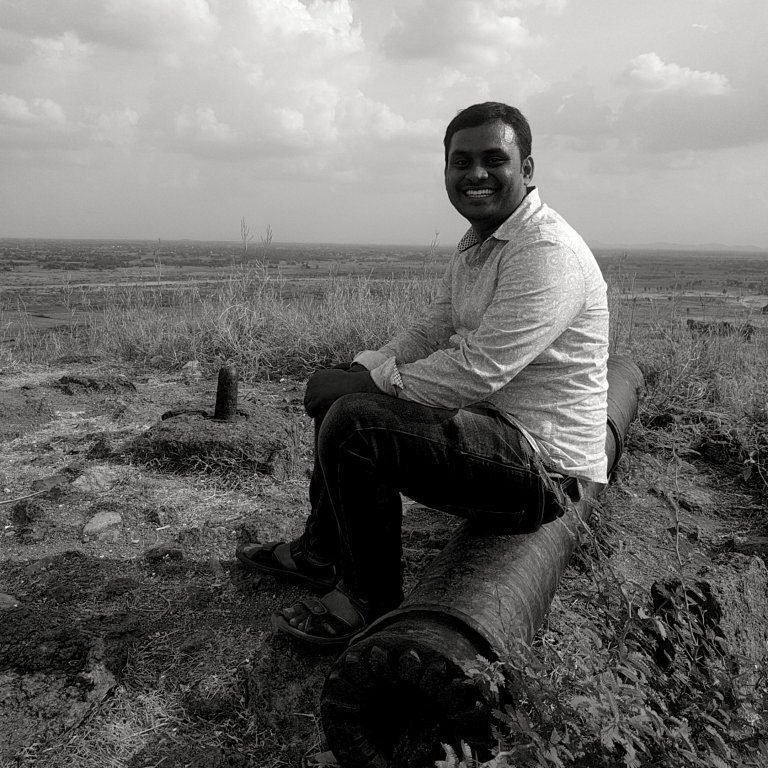 It’s a FORT, not a palace! That I could notice from every part of this place right from we started below. The place was built atop a steep and narrow hill so invaders could not access it easily. It was in the midst of forest (as it seemed for that time although by no means only forest now). The place was built on the cliff not at the middle of the top. That made access to the king only one way (the highway through the army of soldiers!). There are cannon guns, and good ones robustly fixed to the ground. See this one for example. 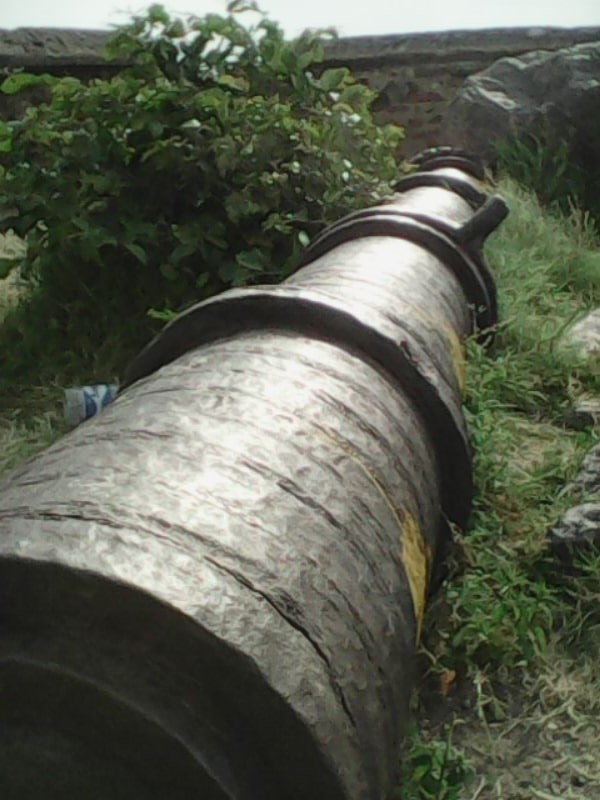 The place chosen for the king’s residence is on a large rocky structure surrounded by stone walls under the watchful eyes of many soldiers, located at different altitudes and vantage points covering the entire access to the fort top. 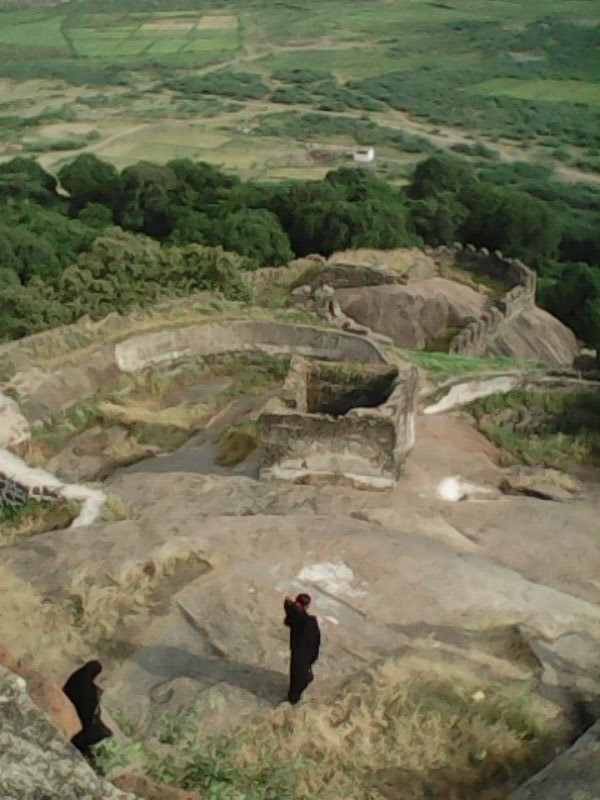 There was a jail for the people under trial. It has such huge walls with only one small entrance to ensure the criminals did not have a chance to escape. And then there was this dark dungeon as prison for those convicted. Once the main entrance is closed they live in ‘hell’ with almost no-sunlight. Sure, punishments would’ve been hard.

As I come down and meet my other members (several of them had climbed some distance and decided to return), I announced I was happy to have been borne in this era where I am not at the mercy of one person, called king. Who knows I could’ve been one of those inmates in the jail mistakenly convicted and had no way of proving myself. Or a soldier who had to risk his life in a battle whether I liked it or not. Who cares whether I was for it or not? Or one of those civilians who worked all day, all year only to earn meagerly and share part of that with King. It is only the king for whom everyone in his kingdom worked for. And what HE says is the be-all and end-all. Whenever I see places such as this I get this eerie thought what it would be like to be a common man in that era. I never think of the possibility of me being the king at that time! I feel may be Narendra Modi (current Prime Minister) could’ve been a king, not me. I believe that Hindu religious school of thought that each soul would only become better in their subsequent lives. From a microorganism to an animal to a human being to a decently lived man, I believe we would only improve in each life. Even if we did gruesome crimes in one life, we may still have a better life in the next (although we miss the chance of being even better). 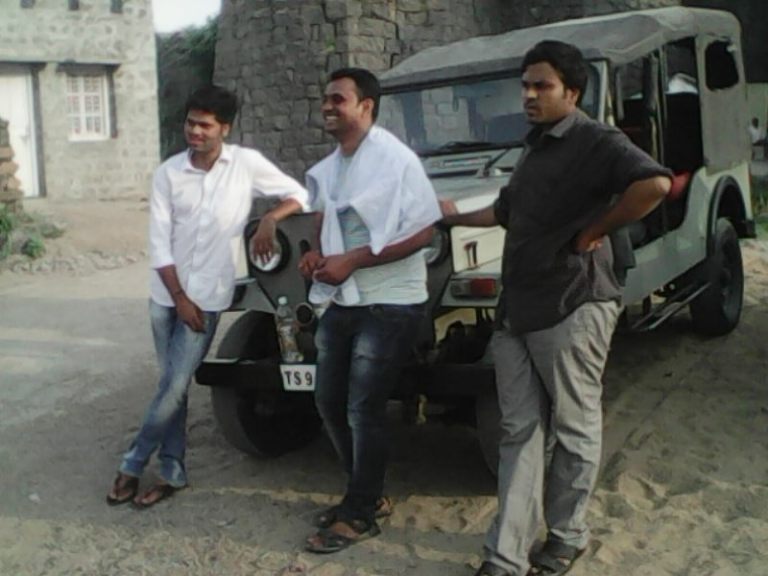 And the adventure actually starts now !?@#!  . . . .  I give this wonderful idea to Varma, the chariot owner and leader of why go back to Karimnagar using again those pathetic and long off road. Perhaps there was a straight way from the black top road here to the highway directly. We could potentially cut down the distance, have the drive through a nicer road. So we check locally and the park attendant confirms this will even cut down the distance by 35 kms in addition to being a better road. So Varma concedes to the advice (mine or park attendant?) and drives on the new route with another car following us from behind. The third group, in the confusion of where we were heading, did not know of our change in plan and headed back to Karimnagar to take on the onwards Karimnagar-Hyderabad highway. As I later figured, they were the smarter souls!

For some distance, checking with locals and confirming it further through Google Maps, and sometimes vice-versa  drove well (we never believe in one source of information, Indians!). And at one small trisection, Google directs us to left on to a smaller road. I suspected this could be a wrong move. Why would we need to move to a smaller road when we are to reach a bigger highway actually to connect to Hyderabad? Anyways, we check the maps again and Varma twists the steering. Bingo! Google does this again! After driving for further distance, each time moving into a smaller sometimes off-roads, we realized that for the Nth time, Google does this. When we broadly know the route, Google is always right. It’s only when we are utterly clueless and depend fully on Google, that it misdirects as completely. We got into places where villagers are amused at a luxury car passing through their cow herds. 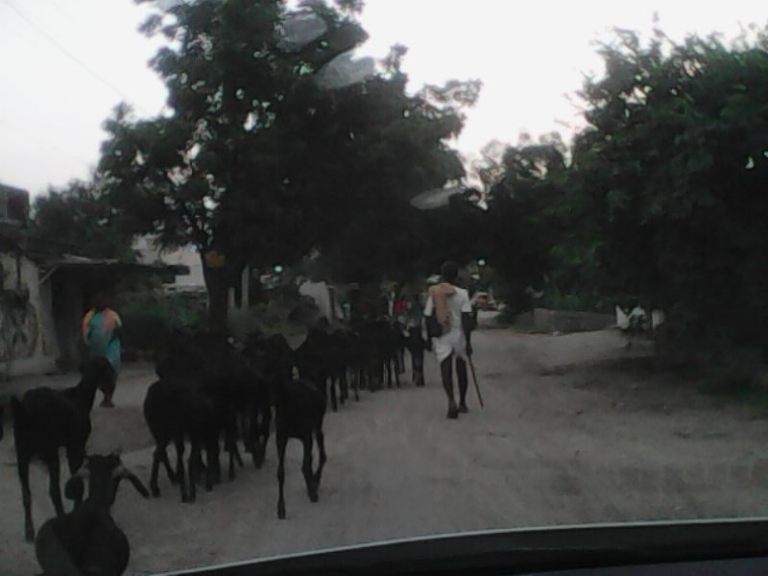 Google Maps drove (nay, directed) us crazy to the end of the tunnel, a.k.a water well. And that’s the end of it. The right turn it asks us to take doesn’t exist. Unless if we were to take that through the well!

Adventurous? Sure it was. Frustrated? Hell no! We were all enjoying passing the pure rural sections. Only that through some roads (or paths if I were to be accurate) we barely had space to squeeze the car through and not fall into slums/drains.

So between inquiring from locals, and confirming with Google Maps, or sometimes vice-versa we pass through umpteen passes and places that were barren to desert sands to bright lush greenery of paddy fields onto the Hyderabad highway. And we made it through with final few litres of petrol with no Gas stations (petrol pumps) on the way, and light fading off.

We were pleasantly surprised to learn that the car that was less adventurous than us two were only some 20 kms ahead of us on the highway. And before our adventurous journey to Srikanth’s marriage came to an end, and after Varma, Himansu and I had sumptuous dinner at a Dhaba by the Kompally highway, the last request from Varma still rings in my ear. For that was the best possible ending to this beautiful long day. A supari beetle leaf pan. The best that I ever had!

Here are more pictures that made the journey so exciting.