Day 1 has been very exciting. I didn’t complain when the two alarms came out to wake me up after only two and a half hours of sleep! Coming to Delhi wasn’t a big affair luckily since it wasn’t raining when we left, what otherwise had been pretty awful past few days at Hyderabad.

At Hyderabad airport I was able to meet up Varma and his cousin, Ramakrishna. The latter seemed very knowledgeable about Himalayas and the conditions over there. He also cautioned me that the trek from Gaurikund to Kedarnath was not an easy one. He gave several tips if I did decide to go by walk instead of horses or a helicopter. He mentioned the importance of drinking water all through the trek for he felt that was the oxygen for high altitudes. He advised about walking slowly taking our own time and breathing well when we climb. I was thankful to him. I wished I could do a selfie with him and Varma at Delhi airport but missed them both while I was queuing up for Dehradun flight. Flight to Dehradun was very short and pleasant except for the rough landing.

It was an amazing sight as we walked away from the aeroplane to the airport building, as in olden times. It was very picturesque. Against the backdrop of hills, the airport stood majestic. Not sure if I am able to convey this through the picture below.

From Dehradun our pre arranged private car took us to Haridwar. Dehradun is bigger than what I imagined. It was from those memories of playing Trade game when I was a child, buying and selling places. Dehradun was one of them. The route to Haridwar was at times scenic but not all the way till Haridwar. I could see the Himalayan ranges impact to the region with very large trees and lot of greenery.

Haridwar is an awesome place. It doesn’t look like I will ever forget my experience from this place. The moment you step into the town you would immediately realize it is religious place. There are many sages in the town and several small temples. And the biggest unmistakable thing about this places is Ganga (or Ganges as the West say). Its presence is felt the moment you step into the town. The river is actually much less wider than I imagined. But the force of water flow is something that strikes immediately. I never thought of this river flowing so rapidly here although I was aware of its rapids at some other places.

We were dropped at Hotel Krishna Ji, an excellent hotel (in Chitra Talkies lane) by about 2:30 pm. We had an awesome hot lunch. Komala probably had a short nap as well. And then we took a battery rickshaw (see picture from the link at end of this blog) at just twenty rupees per head to go to Harki Pouri ghat at about 5:30 pm. It’s a river bank. There were several interesting vendors and fake or real sanyasis in that area (see pictures through the link at end of this blog). As we walked over closer to Ganga, I had very emotional feelings. Its power is really overbearing. River Ganga has a very mighty force in it. It was both scary as well as demanded respect. Despite the iron poles and chains by the river bed for safety, I was afraid of putting my leg into the waters even for a short dip, such was its mighty force. Looking at the Ganga from such close distance made my fears to water even worse. Look at one of the images at Aarti below where water flow can be seen.

There is an evening Aarti for Ganga at many places over its journey but the big ones being at Varanasi and Haridwar. Aarti is major event at this place. The main place Harki Pouri, I was told literally means Steps to Paradise (Swarg). The event of Aarti itself consisted of puja to Ganga by purohits who seemed to follow styles South, East and North India. For example there were some sections which seemed like Tamilian a.k.a. dravidian style.

Aarti included large flames of camphor and oil dipped cotton sticks being lit. Many people including my wife, Komala lit the lamp surrounded by flowers kept in a large lotus leaf and slipped them to float on Ganga waters. The lit lamps floating on the flowing waters is an amazing sight to watch particularly when the sun had just set. The chanting by purohits was mesmerizing for a grand evening. It was an overall amazing amidst large crowds who had to witness this. 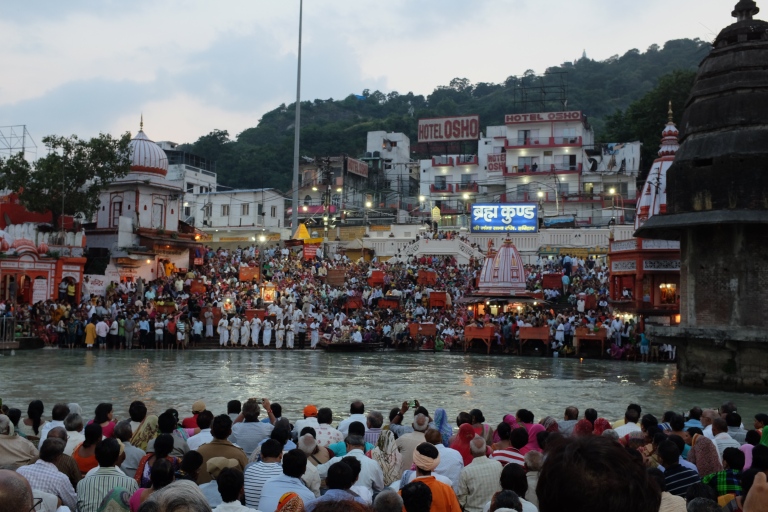 The other aspect which amazed me about Haridwar was that Ganga was accompanying us almost anywhere we went. Basically the town was longitudinally by the river. And so were the floating population here. The place is filled with people in large numbers. There are people walking by in large numbers anywhere you go. Plenty of small shops. Plenty of small restaurants. Plenty of roadside shopkeepers.. Plenty of activity. The energy was overflowing everywhere. Ganga was everywhere you go. It was showing its immense energy and that rubbed off on people too! What an amazing fast and pious place!! 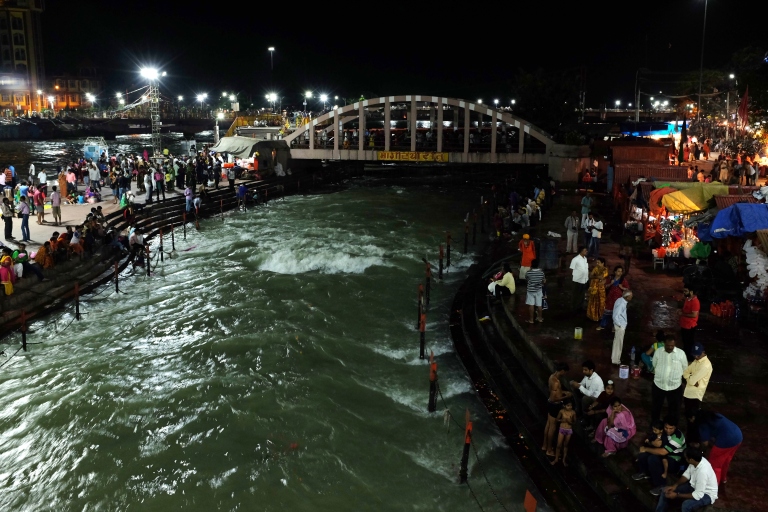 More pictures that reflect Haridwar and its awesome spirit can be seen here.