On our second day into trip and stay at Haridwar, we stayed at a beautiful hotel, Krisna Ji. Although a small room, it was well equipped and cleanly maintained. The service was excellent. Couldn’t have asked for more. We woke up early and had the driver take us for the holy Ganga dip. He suggested we go to a place other than at Harki Pouri since that would require us to go by rickshaw only.

Although I certainly was scared of the fast flowing waters there, the fact remains that it seemed to carry lot of energy and I felt the velocity of water would make my physical body at least clean, if not pure! But now we had gone to a different bathing ghat. There was kind of a fence so we don’t go deep and swept away by the waters. But this side of water was not flowing fast and also seemed a little contaminated with bushes and other trash. Honestly it was not the most exciting to step into. Nevertheless my wife and I did have the dip. The water was very cold and certainly more exciting than I hoped. Even I, who bathes with cold water all year, found this quite cold. And it certainly was very refreshing.

I was wondering why the water in this part of Ganges be so cold despite traveling several hundred kilometers from the snow peaked icy mountains it came from. As I thought about, I came up with a theory (hope I am right). Water when it originated is molten ice, and thus at zero degree celsius. The outer layer of the water on the river is exposed to the atmosphere and therefore has higher temperature. But this becomes a bad conductor and lower layers of water remain at near freezing point only slightly warmer (just as hot water over cold water in the bathroom bucket). The river being a fast moving one until and after Haridwar barely waits enough to have an increase in temperature significantly.  So as I dipped in myself in the waters, it is actually much colder than it was at surface.

After a sumptuous breakfast back at hotel, we left Haridwar.

Past Dehradun, we went to Sahasradhara water stream. It was in hills and had us pass through some ghat section. By its name I thought this would probably be several streams (Sahasra meaning thousand) of waterfalls. I was hoping to see a beautiful sight. But it wasn’t anything like that. It was a fast flowing mountain stream. We were told there was a hot sulphur water spring that used to join the stream but since exhausted since last year rains. The stream nevertheless was beautiful enough to spend some time.

We then proceeded to Mussoorie. Did some shopping and had a picture of us taken by a commercial photographer. The way to Mussoorie was beautiful. Hills with clouds and brightly painted buildings gave a mesmerizing appearance to the landscape. Mussoorie place itself is a nice summer resort for sure. It is very picturesque. When the sky is clear and in winter perhaps one could see snow peaked Himalayan mountain region. But when we were at the place, it was cloudy. So there wasn’t anything to watch from viewpoint. Komala had the joy of purchasing a winter jacket preparing her for the Chardham trip.

On our way further up from Mussoorie we got to see Kempty Waterfalls. It was beautiful although my pictures did not do enough justice to this. Lack of right viewpoint was one of the challenges, perhaps. But you can watch a video from the link at the end of this blog.

Further from here we had the fun of river, Yamunotri following us. It was wonderful to have a flowing and winding river giving us company all through the mountains.

On our way we saw some nomads. They were rearing either cattle or sheep. Understably, they have the animals eat the grass/plants during the stay at a place (right in the middle of a hill!). They sell the milk to nearby villages which is their source of income. Here is one of a sheep flock. 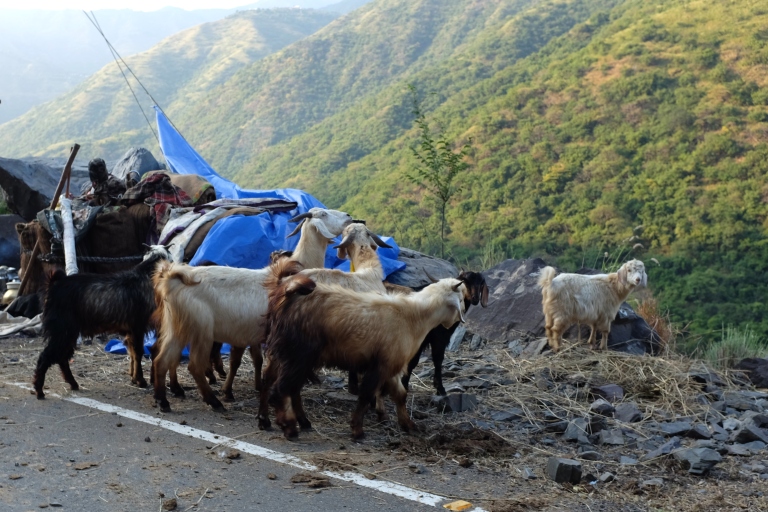 One good aspect of Uttarakhand provided by government, at least in this district is that there are temporary rest rooms on the way even in hills. Unfortunately one step into that and you don’t want to do your thing! 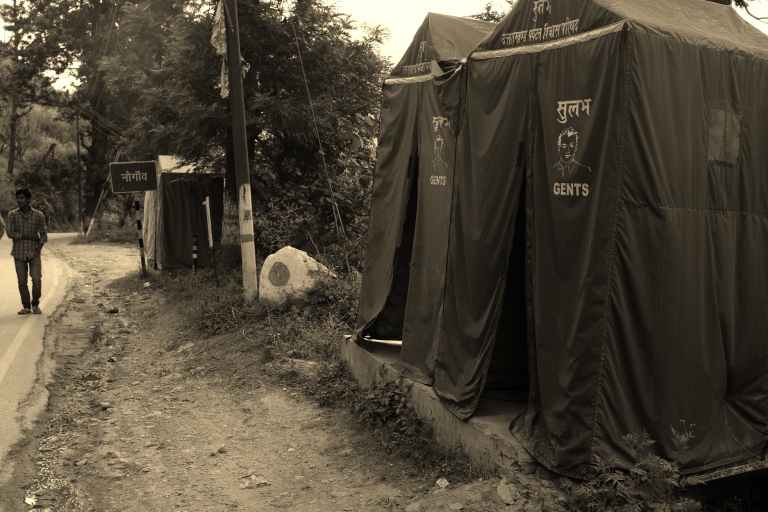 One other noticeable aspect of the mountains is that when you come across a gas station (petrol pump) you suddenly realize there were barely any on the way. It is important to fill the petrol/diesel tank fully and preferably carry some spare too!

We came to final halt for the day at Barkot. This place is also in high altitude and among the hills. It is a small town. The hotel we got here was an anti of what we had at Haridwar. The color and paint of the room from the picture I have taken will adequately say this (follow the link at the of this blog). It was a pathetic hotel by room, service and food. I even went to the extent of eating out although our package included dinner and breakfast. But quickly realized this town did not have anything to offer better than what the hotel had. So much for the second day before I hit the bed to wake up before 5 am the next day.

By the way, you may want to click on ‘follow’ button from the Menu to get a message when I post further blog-posts on this Chardham Yatra.

One thought on “Himalayas (Day 2) – Mussorie”