Expectations are different from Reality. Nevertheless, reality could still be very exciting and happy. And this was one such experience.

I woke up very early and watching from my window while the nearby mountains were picturesque, I was wondering what the white figure ahead of me was. It sure looked like a ghost if I did not believe they existed as we fathom in movies. But it was a little unnerving and catching my attention now and then. As it day dawned upon later, I smiled when I realized it wasjust a bundle of clothes! Look at the white object in the balcony of the house in the picture below.

Hotel Akash Ganga was decent for a night’s sleep. Food and service was good too. Armed with packed warm Poha for breakfast, we left a little earlier than 7 am today. We reached proper Uttarkashi town (our hotel was a few kilometers away from main town). We went to Kashi Vishwanath temple. It was a good temple. There was something interesting about the very tall iron Trishul here that I didn’t quite get it. The purohit said something like when Lord Shiva disappeared, goddess Parvathi was searching for him. He appeared with his Trishul and had that dug deep into the Pathaal. The top portion of the trishul despite being so large could be easily be shaken with just a single finger such as the ring finger. It did appear strange that the iron object could stay well not rusted or broken for so long. This was some 30 feet or so high and was very imposing. 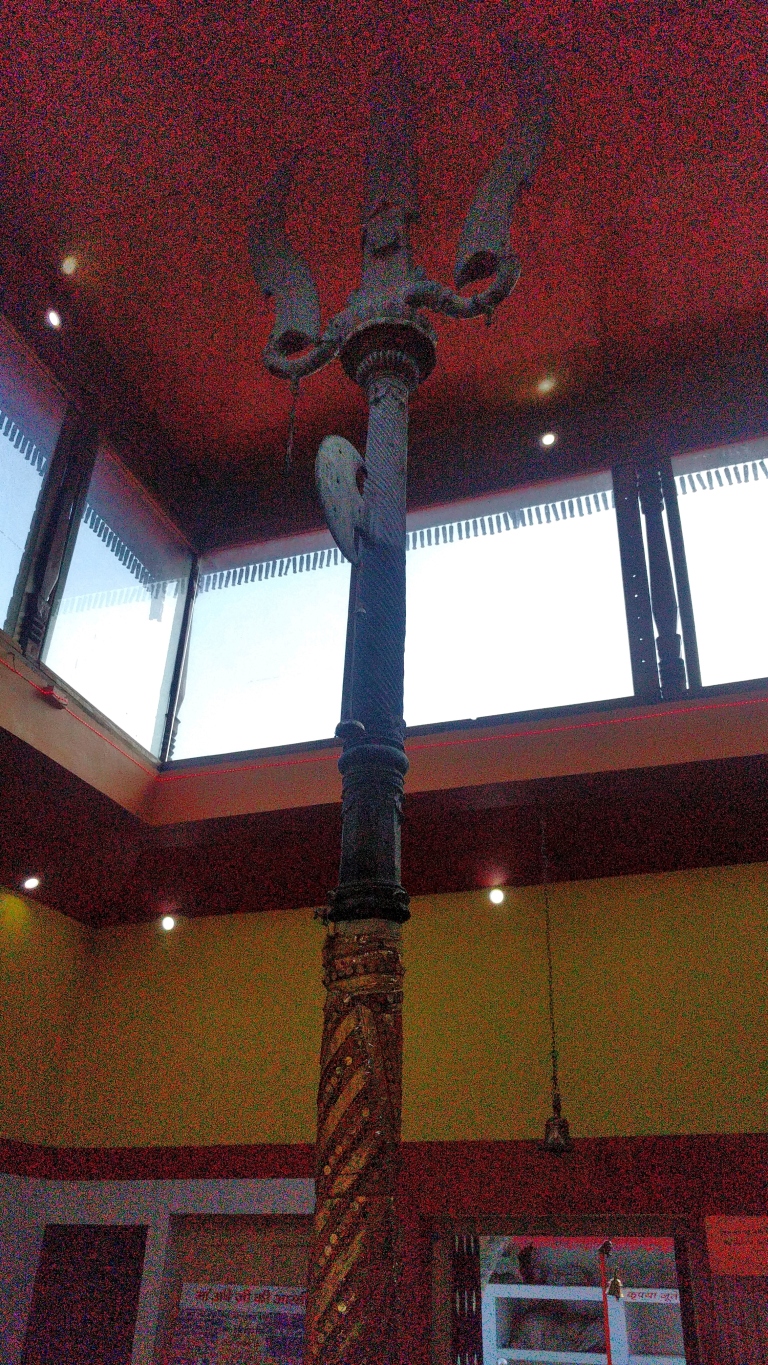 Main deity, lord Shiva was a leaning large shivling. We were allowed to touch it. Luckily we were in for the morning Aarti. It was very interesting what with mechanised music play in the background amidst religious chants by the devotees. I read that just like in Varanasi, Ganga flows in opposite direction from south towards north. I didn’t notice that though while Ganga was flowing next to our road. I somehow missed paying attention to that aspect. I didn’t notice anything unusual.

And then we left for Gangotri. The ride was amazing. It was superlative from a viewpoint on our way at that hour combined with the amazing surfing sounds of the immensely energetic Ganga. With hills as backdrop and Goumukh snowy peak at the end of the river Ganga’s flowing stream was simply breathtaking. The water was gray and where it was hitting the rocks was in super white color. How fast Ganga was could easily be noticed throughout our journey today. Through our 4 hour drive I was never bored of watching the hills or the Ganges. I kept shooting pictures one after the other never satisfied of shooting enough notwithstanding the fact that I am not one of those Spray and Pray type (shoot lots of pictures hoping at least some will come out good. I never believed in that). There were some water crossings too. Even this thin layer of flowing water was very cold. 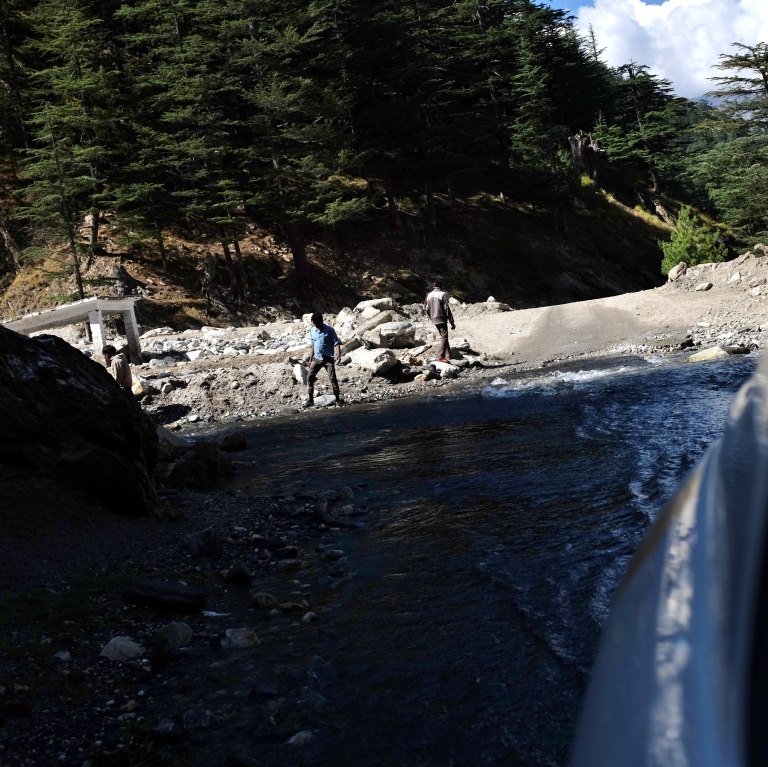 On our way we got to Gangnani, a hot water spring identical to the one we bathed at Yamunotri. To save time, we did not bathe in this. But I was surprised to realize most hot water spring seem to exist in colder regions. There must be some science to this that I didn’t care to check. I guess good and evil, beautiful and ugly, hot and cold, hill and valley, light and dark, they all coexist in nature. It is for us choose the righteous ones over the wrong ones and lead a fulfilling life.

The temple at Gangotri was bigger than what I had imagined and is with much grandeur than I was expecting. I just hoped there would be a river coming from between the hills where one would step down to bathe. It wasn’t anything like that. It was a small town of several shops and restaurants. There is insignificant walk of a half a kilometre also from our dropping point to the place for getting to the river and a temple. There were troublesome purohits all over becoming friendly initially, over friendly next to pester us for using their services. After some stage we get to a point to when you want to avoid the, altogether and have some peaceful time at the place if visit.

The river can be reached by getting down some steps.We didn’t dare taking a bath here. No one does! The river is fierce here coming from the top. If someone steps beyond couple of steps into it he is sure to get washed away. We got to the waters and sprinkled the holy waters on our head. I had actually contemplated drinking that holy water straight from its source to my stomach full. That was a yearning for a few years. But this was not possible here. The water is actually quite muddy. There is a main goddess Ganga temple in beautiful white paint. Alongside the river below there is a small temple of Bhageerath who is said to have done the penance at this very place to bring Ganga down to earth from atop Lord Shiva.

The river was icy cold. So cold that you could not keep your feet in river for some time or be able to bear the cold as we fill the water bottles.I have a theory as to why the water in Ganga is so cold even after traveling several hundred kilometers at Haridwar. Water comes from melting snow from the top of the snow mountains. That is a known thing. So the water that is flowing now has its starting temperature of zero degrees celsius. Water layer on the top of the stream will certainly draw temperature from outside and may raise in temperature. But the water below this top layer is still at ultra low temperature and cold. Cold water is heavier and stays below the outer layer throughout its few hundred kilometer travel. The river flowing at very high speeds makes this possible even so. A stagnant water would have slowly gained higher temperature from outer layer. Not here where the river is ultra fast. And to top it up, cold water from other mountains is also joining at several locations. So when you put your body into the river, although from the outer layer it may appear the water is not very cold, when you step in for a bath we find it ultra cold. Perhaps it is even risky to stay too long in the river with that super cold temperature. Below is a picture of the river and at far up is the snow peaked mountain (can barely be seen amidst clouds) which is probably the actual source of Ganga.

Anyway, there is no concept of taking full bath in the Ganges at Gangotri ☺. It’s a different thing that I had a longing to take a holy dip in Ganges at its origin (the official one being Gangotri). I am not scared of cold water. I ‘think’ I can handle it for some time. But the river was too too fast for me to be able to stand up even if it was not too deep. I was barely able to fill up the cans we bought to take home. Our driver went to the extent of saying Ganga (or Yamuna) water will stay unspoiled for even 10 years even if the lid was kept open. He claims that it is because the river water absorbs lots of herbs on its way. Amazing!

I thought I would fill two additional water bottles with sacred Ganga water and simply drink it away 😍 whenever I was thirsty (and even when not!). But alas! The rainy season that ended brought lot of rain water all over and when they join the mainstream they also bring in mud on its journey.

So the water was not crystal clear holy water that I was expecting (the driver tells it is sparkling clean during winter).I could not dare drink this water with suspending matter be it mud or calcium stone powder!). It may or may not harm me. But I wasn’t excited to drink that. It’s okay. Expectations are different from Reality. And reality could still be very exciting and happy! Very Happy!

On our way back we some apple trees, an ashram with beautiful idols of Shiva and others, some cute furry mountain dogs (they call them pahadi kutta locally) and more beautiful scenery with the ever energetic Ganga and its sparkling water (sometimes they are milky white). After reaching our hotel, we had a late evening walk into the village and even had a conversation with a localite. Pictures of these and more (including some videos) can be seen here.