Have you ever known that there are motorcycles with soul and without? My today’s experience is a continuation of that philosophy. Read on ….. 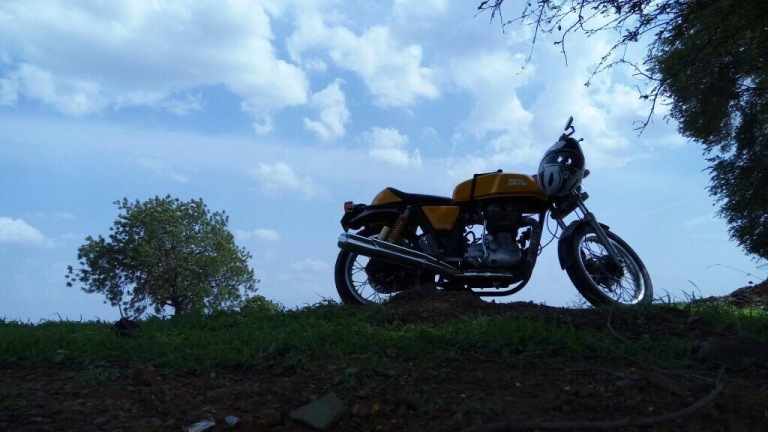 I had read about this somewhere. It got to be true, however much you may want to discard the idea. And if you don’t want to believe me, get some retro motorcycle and use it for some time. You would know! Here is what they say about this concept.

Some brands of motorcycles behave very well. They do what is expected of them. Exactly what is expected of them. When you release the stand, it will never misbalance. When you push the ignition, it surely will start the engine with a purr (assuming of course there is petrol in the fuel tank, battery is good etc.). When you engage a gear it surely will fall into that, getting into neutral is never an issue, brakes will exactly work as they did the last time, and so on. The typical Japanese motorcycles fall into this category. In fact I was listening to an ex-Honda senior engineer who was leading their R&D until he retired. Apparently Honda motorcycles are manufactured in such a way that everything should be predictable. Even for someone who is completely new to motorcycles, he/she should be able to ride one comfortably even if that was a 1000 cc bike. He said their philosophy is such, that when you do quarter turn of the throttle you should get a quarter of the power of the motorcycle. When you do a half turn you will get half the power and needless to say when you do a three-fourth you’ll get so much of engine’s power. When you apply 25% pressure on brake lever, you’ll get 25% braking and so on. You get it. Right? Everything is predictable. You know what to do and how much in a panic situation. And in a normal situation. You exactly know how the bike responds. It doesn’t matter if it was a Sunday or a Monday. Or if it was a morning or evening. Perhaps it doesn’t even matter if it was a sunny day or raining. The bike will behave exactly what it was expected of. The typical Japanese bikes. Near zero maintenance. No surprises. Neither unpleasant nor pleasant ones! These are boring soul-less bikes. They don’t instill any adventure when you take the bike out. These are the everyday commute bikes or the number game performance bikes! They are the same everyday and you get sick of them after sometime. And most bikes don’t even look good enough to stare at them for sometime. There is too much symmetry, too much refined to be able to pick anything special or unique. They lack a punch in the whole concept of motorcycling.

Contrast this to good old British bikes for example. Be it a Triumph or the now Indianized Royal Enfield. I have used a 1962 Bullet motorcycle for over 30 years now. I can never tell for sure if my first kick will start the engine. Or for that matter Any kick. When the going is good, this 350cc bike that is prone for backfire while kicking can be easily started with an easy push even by hand!  Even if it had just come back from maintenance service, you could not guarantee that it will start on first kick. I could never tell within how much distance the bike would stop. The method was simple. You press the brake lever harder and harder until it stops to a desired point! I would fiddle with the idling screw all the time for that perfect engine tune, when the beat is ‘music’ to ears! After I had perfectly tuned it at home, I would find the need to do fine tune it a little more and some more and some more, during the ride. Next day it repeats.

On a rainy and cold day, when you kick start it, surprise! They start sometimes in first kick. On a decent sunny day after you have ridden it for a while and the engine is warm, you parked it for two minutes and want to start again. Nope! Not sure why it doesn’t start easily. After you have twisted the throttle half way through you think there should be lot more power in store. Nope! No luck. Further twist doesn’t boost the engine anymore! They are completely unpredictable motorbikes. On some days they give such hassle that you decide to sell it immediately and buy a good reliable Japanese bike. You are done with this frustrating unpredictability. The very next day it is so well behaved and charming that you would repent why did you even think of disposing it. It has suddenly become very dear to you and most loved one.

I read a post in a forum a while ago, every time this guy’s Enfield Bullet frustrated him to the core, he would decide that he would sell off this god-damn old obsolete bike and buy a Yamaha. But the next time when he is eyeing a nearby Yamaha, his bike would suddenly behave very well. He never understood the rationale. After all, he knew bikes are inanimate objects and could not have soul of their own. How could it read his mind and behave as needed by the hour?

And so it was for me today. I have been reading about the reliability and low maintenance of Honda bikes last few weeks. Watched a hell lot of YouTube videos. Add to that, I had near two week vacation to Kerala. Tired after retuning and the excuse of rains in Hyderabad, I had been driving the car. So after a good month or so gap I wanted to take out to office my Royal Enfield Continental GT (3 year old). And the ride was very surprising. It was literally ‘buttery’ smooth. Despite not starting the bike for so long, despite the fact that it rained. I correct myself, it ‘poured’ on this bike with so many rains in last three weeks. Despite all that, the bike started with the very first push on the ignition switch. Even my ₹16 lakh Skoda did not start easily after my return from Kerala with a battery down situation. How come the CGT bike starts so easily? Surprised! Each change of gear was ‘silk’ smooth. It was a pleasure to lightly pull the clutch or just tap the gear lever! Power delivered whenever I needed. Brakes were perfect. The tires did not lose air pressure despite a month long park at home. The bike gave me extreme pleasure throughout my ride to AND  from office. Due to my-bad, I once had a front tire slid on sandy road patch. Before I could panic, the bike balanced itself in a second! The engine was very smooth. And when I do quick twist of the throttle, rhe silencer roared. The double horn honked like a double horn every time I used it!! What the heck? And I was thinking, this bike is behaving so well today except………, nope, nothing! No exception. It was faultless!! So this CGT despite being a new bike with all the electronics, comes from the same stable of Royal Enfield. So it has a soul too just like my good old 55 year Bullet bike.

Now if you wouldn’t recognise that some bikes have soul and some don’t, what else could I do to prove the point?

It may not be out of place to share this video that some Royal Enfield fans have made against the Bajaj Dominar bike. A very funny one. Watch it here https://youtu.be/FplLIwAFDMI

Please. No pun intended on any brand bike. This is just a light hearted post that I wanted to pen of my thoughts today.

2 thoughts on “Motorcycles with a Soul”