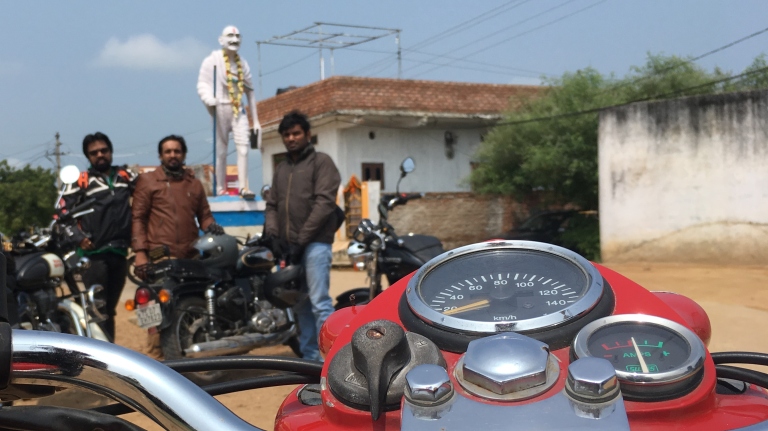 As we celebrate Gandhi Jayanthi, I wanted to know how well is the Mahatma still  alive in the hearts of people. I wouldn’t expect him to have a place in busy self-centered lives of the urban, but wanted to see if he was alive at least in the rural and the harijans for whom he worked so hard in his life! So a thought came why not do a motorcycle ride and search through rural areas of Telangana, my home state. I chalked out a well thought out plan from Google Maps choosing those remote areas far from towns, preferably in the midst of forests or near lakes. I thought this could be an interesting ride at a lazy pace searching for Mahatma on the Gandhi Jayanthi day. Luckily few more friends volunteered to join me in this search. I didn’t realize though that my return would become unforgettable experience of riding too! 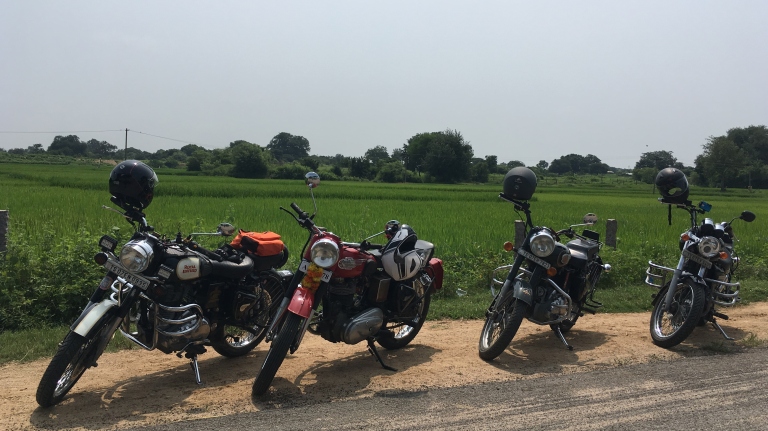 We set out a little late so we could accommodate another friend, Sastry who had an early morning appointment at a yoga center. But due to some miscalculation of the meeting point, we missed him anyway for this one-of-a-kind ride. After hefty breakfast at Raghavendra Tiffins, Gandimaisamma X Roads, we rode our FOUR Royal Enfield bikes! I chose my ever hardy, ’62 Bullet who I trust will not fall me down should the rural interior roads be not good enough and bumpy for my skills. Sure, it reassured me all the way during the ride. My motorcycling riding grew up on him after all. He (I mean, my Bullet) couldn’t let me down when I needed it the most. 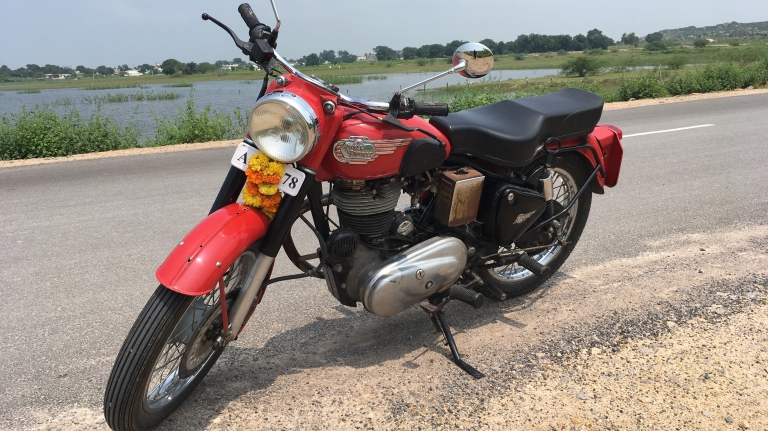 The first place that we chose to was a deviation from main road into a remote village. Roads were excellent thanks to current Government, but I didn’t find any Gandhi statue in that village. But as we turned back a colleague saw a Gandhi statue and garlanded. We went near it, took some pictures including selfie ones of course. I was happy that the first place that we visited had Gandhi remembered, and respected.

It was a wonderful drive back through plush greenery and water bodies brimming with water. I understand there was a tamil story that went by a learned man asking in a kingdom if it rained at least four times a month, which would then confirm that ecologically everything is perfect and that the king is taking care of his people and nature. I don’t know about that but since Telangana state has formed three years back, there is an increasing trend of rains and water bodies (sans Hyderabad!). 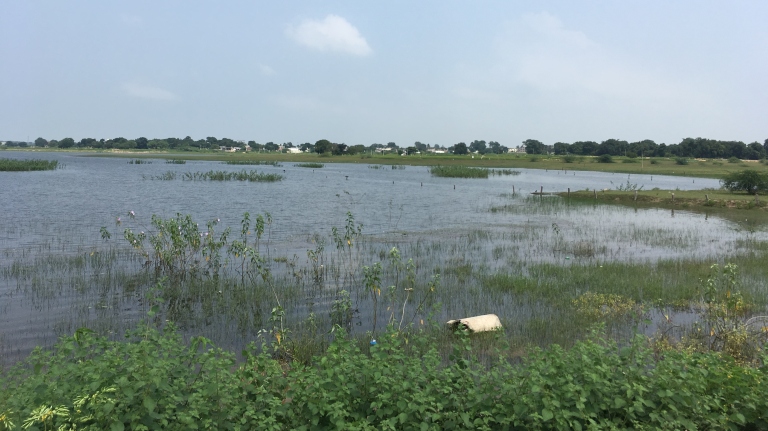 We then went to another village called Kodakandla. Here it was even more exciting. There was an elderly person aged about 70 years who took interest with us. I asked him how they had celebrated Gandhi Jayanti (watch the video at the end of this post). He said they celebrated in a big way with about 50 – 70 people gathering to pay their respects to Mahatma. It was early in the morning though (and we missed it) and had nearly everyone in the town. He said it was just like what they had for Dussehra and Muharram festivals this year. He said, given that this time the festival was adjoining a weekend, there were more people and in a relaxed mode too. I noticed Gandhi statue had a happy face in the statue. When I mentioned that, the old man replied back stating that he actually cleans the statue every week (and so Gandhi is happy?).

From there we moved on to few more villages. I did not find celebration in every village we went by. But that is also possibly because we moved through the main road only and may have missed statues within interiors of villages. For example here was another that I noticed from the main road and went inside. I spoke to a youngster over here. He mentioned there were some 200 people who gathered in the morning and paid their respects (watch video at end of this post).

I had few more villages on my route plan but it was getting hot, and past lunch time. So we preferred to go back. I was having my own small bike trouble with a tool box cover opening up frequently with the tape (for a faulty lock) I had put on it loosening over. It was surprising that most restaurants were closed. It being a Gandhi Jayanthi, non-veg was not to be served (I just learned that then), most restaurants preferred to close. Finally we found one on the Mumbai Highway and had an ‘okay’ lunch. 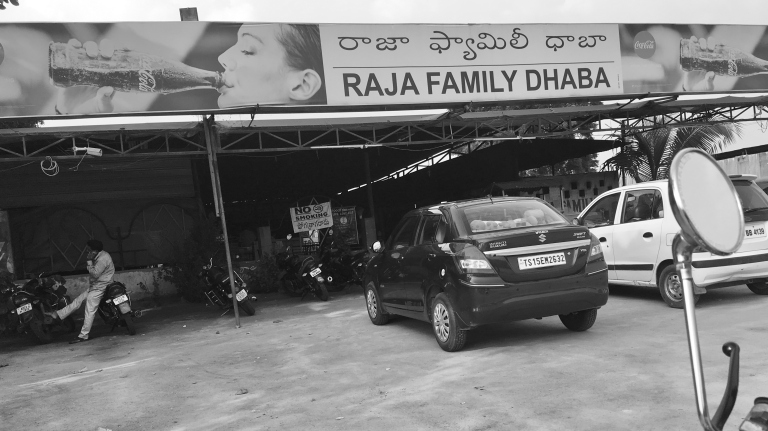 We split our ways to return as I was going to take time fixing the hanging tool box cover every now and then.

When I was between Sangareddy and Patancheru, it started raining very heavily. Very very heavily as a matter of fact! But I preferred to ride in the rain than halt since I suspected it was going to rain for long time. I had my motorcycle jacket providing some respite from rain although not completely waterproof. I realized though that my new iPhone in the trouser pocket was getting wet and this was not the waterproof model. So I stopped under the cover of outer ring road to put the phone inside my jacket. In the process, the engine stalled and wouldn’t start again. I knew this happened often with this older model when the rainwater (or damp air) would seep into the CV Points box or the engine through the spark plug, if the engine stopped even briefly. I was lazy to take out my tools and fix it since the bike was showing signs of starting. It took over 30-45 minutes of continuous kicking the start rod before the engine came to life! And I decided I was not going to stop again, lest this should repeat.

After crossing Patancheru, the road was nearly dry with no rain. But as I crossed Ramachandrapuram, droplets from the dark sky made my realize this is exactly how it started an hour ago. And I continued . . . . and it poured. We all know the saying, “when it rains, it pours”! But this was much severe. Within minutes, the roads were filled with not puddles but water flowing several inches high! Not a soul of two wheeler could be spotted on the road. Even several four wheelers stopped by the road side. But I continued……for I knew it will become much worse with bike not starting again the traffic increasing if I waited.

As I was going down the Balkampet under rail bridge road (and several such places earlier) I knew I was taking a big risk. To top it up, drain pipes from higher ground were pouring more water onto the street. I was applying all the theory I had gasped from the motorcycle podcasts I learned from to handle bike during rain. One big one that I was careful about was to maintain enough gap from the four wheelers in front of me and watching carefully, so if they slowed or stopped briefly I could still ride the bike without having to stop. An actual stop would only mean disaster with those deep and fast flowing waters crossing the road. I would carefully watch vehicle in front of me to predict potholes which I wouldn’t see otherwise in the water.

Eventually when I reached home, I noticed even the road near my house was deep under heavy water, which is very very rare. I learned later from news that this was the heaviest rainfall of the season. I reached home about 6 pm or few minutes sooner, but had not updated the WhatsApp riding group of my safe arrival. I became busy with few other urgent matters (such my verandah drenched with the furniture in). I understood my colleagues reached their homes much later, perhaps because they halted on their way few times even though they left sooner than me. My worry for my bike actually allowed me to ride it despite the danger. It was an altogether skill development exercise for me to ride in such heavy rain!

At the end of the day, it was a memorable experience. It was satiating to know that Mahatma was still alive in India. Many of us may not practice most of what he did and asked us to. Yet many of us still see him as like none other. There was no Mahatma yet again. And he is remembered for that . . . . 148 years after he was born, in this great soil of ours!

Here is an under 5 minute video of the ride including the short interviews with the villagers, which I hope you will enjoy watching.