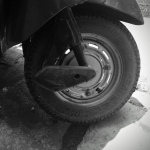 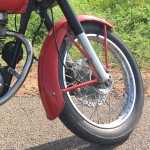 At the outset let me confess, i have always been biased towards motorcycle. Nevertheless I made a genuine attempt to understand the differences.

After 26 years, the other day I had a chance to repeat something. My first motored two wheeler was a Royal Enfield Bullet. Unlike many other riders, I never had any qualms of it being a heavy or not as agile bike as most modern bikes even during the times I acquired it, were.

And it just happened not with an intention to but I never rode any motored two wheeler than my Bullet, or the more recently acquired another heavy weight and traditional bike, Royal Enfield Continental GT. So needless to say, I never owned or rode even for shorter durations, a scooter.

But during my honey moon period with my wife at Vizag (among several places we visited then), my uncle’s friend feeling affectionate for the newly wedded, loaned his Bajaj Chetak scooter to us. That was 26 years ago. He gave it for two days or so to us. Now after 26 years a situation came when my younger brother was selling off his scooter. It occurred to me why not I ride that to office and see how a gearless scooter felt, on the same commute route and time to my Work place. So I did one. And here are my impressions.

Thanks to centrally and low mounted engine, the bike has low and central center of gravity. As such it is very very stable. I felt it was even stable than the legendary RE Bullet. So navigating through stop and go or snail pace traffic was easy as a cake.

It has a very small turning radius, thanks to small wheels. So making a near 90 degree turn in stop and go traffic, in front of a car and annoy him was easy. Navigating puddles and pot holes that randomly come not existent the previous day was easy. Only as long as the scooter was near the edge of course.

Helmet has a Cave

The unworn helmet has a cave of its own under the seat, to hide into when it is not on the head. So no searching around where to hang or the dilemma of if I should lock it or not. Nice cool feature.

Shoes and Trousers are Clean

Since we tuck in legs behind the front shield, shoes and trousers are reasonably protected from dust, puddle water and several other road elements. But let me caution that this is only to some degree. Not all the fine dust or smoke from other pollutant vehicles are blocked from hugging the clothes ‘with a family love hard to breakaway from’!

Accelerator is Brake Too

Your accelerator almost acts as a brake as well. Several times when i turn off the accelerator, there is so much loss of power that there is no need to apply brakes additionally. The scooter comes to stationary quickly. Hmm….so much lack of power (or more accurately call it lack of momentum)? Depends on how you look at it. Boon or a Curse.

Your usual clutch lever, I mean it usually is positions is brake. So I needed to be careful. The usual habit of pressing the clutch lever a little bit results in significant brake since the releasing the accelerator itself had some braking effect.

The horn of most scooters is terrible from what I believe. The one I used wasn’t any exception.

My legs would comfortably land on ground when in need. And owing to its outstanding low speed stability, I had fewer such situation even.

Up to 60-65 kmph isn’t much of an issue. I am not upset with a low power. As a matter of fact I hardly noticed it. Up to these speeds, it may have even felt faster occasionally. But from 60 onwards it didn’t look like it was wanting, nope, willing to go. I am sure if I was persistent it would’ve. But I need instant acceleration. I am not a patient guy when one of my ends is on an accelerator mounted pipe. It was clear, this was no highway cruiser.

Yep! This does have a handle or two in the leg area so we could hang the laptop bag or anything else. No, don’t say additionally ’cause after a laptop bag there is hardly any space left other than my feet, which itself was a knack to place ’em. Honestly, I did not see luggage space of a scooter to be a big advantage over motorcycles. For the latter, a couple of side panniers end up giving more and perhaps even lockable storage space. Yes, the ease of just hanging is something useful but no big deal for me.

This was pathetic. I quickly realised why scooters tend to have more traffic accidents. The vehicle is very prone to bending over to one side or the other with every minor change in its flight! It didn’t feel safe at all to ride at high speeds. Sixty seemed like a lot.

The shock absorbers and suspension (in case you didn’t know, in a two wheeler the front shocks are called suspension since that is their primary objective of holding to the road, while the rear ones are called shock absorbers since these are the ones that actually provide ride comfort) are pathetic. There is no way one could stand on pegs unlike on a motorcycle and ride over bumps at moderately or even high speeds. The handle bar goes haywire if you do, and tells you, you don’t want to do that. Riding over those stacked bumps of two or three or four together? Forget about them unless you slow down.

Thrill of ride for a scooter? It’s not even worth raising a question leave alone discuss.

The scooter does feel easier to ride when compared to the two royal enfields I own and ride. But this is something that i felt with every other motorcycle I tried my hands, nay, legs on. The Enfields are not just heavy (there are many which are lot more) but relatively difficult to manoeuver. I don’t observe this ever when I ride them but instantly know when I ride any other motorcycle. So scooter wasn’t any different.

So What Exactly Is The Difference?

After focusing some energies into analysis of the design of a scooter visa-vis motorcycle, I understood some aspects which is the essence of this blog, if you have been patient enough to read thus long. 🙂

A scooter essentially has small wheels. This allows it to be steered easily. So manoeuvrability is very good for certain situations. But the same thing becomes an issue for rough terrain. It cannot handle as well as a motorcycle with large wheels. The large wheels of a motorcycle not only can handle rough terrain well but also can handle bumps much easier. I have not verified but believe motorcycles may have longer wheelbase which also allows it to have greater ride stability. Bumps are easier to deal with. Small potholes are nonexistent issues for large wheels.

All in all, not surprisingly for me, I didn’t like riding a scooter. While it sure does have some minor advantages of a motorcycle and even knowing well I am biased towards the large motorcycles, yet I do feel, the overall feel of motorcycles is a lot better than and fun than scooters. And I am not delving into the utilitarian benefits of convenient for women saree or skirt wear or that women can sit sideways as a pillion etc. They are not part of the objectives of this evaluation which was more of how does it feel for the rider!

While the primary observations may not grossly differ from one scooter VA another for this objective discussion, in case you want to know, the scooter I rode was TVS Jupiter.