After my successful and confidence boosting western Karnataka tour by my car (that is another blog I intend to write sometime soon, hopefully), I decided to do an eastern Tamilnadu tour as well, by car. I was accompanied by wife, Komala. We did this in 11 days and here are some impressions, pictures and memories from this trip.

This was an outstanding trip from late last year. With my fond ex-manager, Nana’s son getting married now in Chennai, I wanted to pile on this trip along with the marriage visit that I was going to do anyway. It was a tough decision to such a long leave of 6 working days all in one go but that was the only way I could manage to do both. I will present herewith in a chronological way how we did the drive.

Fun started to my nightmare (literally), the previous night when I wanted to put luggage in car so my morning start will be un-delayed and fresh with no stress. The car battery was much dead that even the doors wouldn’t open except manually, leave only starting the car. So after the dreadful running around (‘in’ the phone of-course!), I chalked out a plan and spoke to some support services. In morning, the mechanic came and swapped the smaller battery of my other car (Ford Figo) into my Skoda Octavia RS. It was a good decision in retrospect that I decided to do the long drive with the bigger, comfortable, easy to drive Skoda than use any of the other two options of Figo or Maruthi 800.

Starting at 5 am and after an amazing lunch at the famous, Komala Vilas (restaurant by wife’s name) in Nellore.

We then drove through an unbelievable thick, very thick fog during mid day to Chennai. Very few times did I such thick fog here in India. The picture below to be honest, doesn’t do any justice to what it was. There wasn’t anywhere as much light as the digital processing of cameras these days misrepresent as the one below. Many vehicles actually stopped by roadside unable to see road ahead. 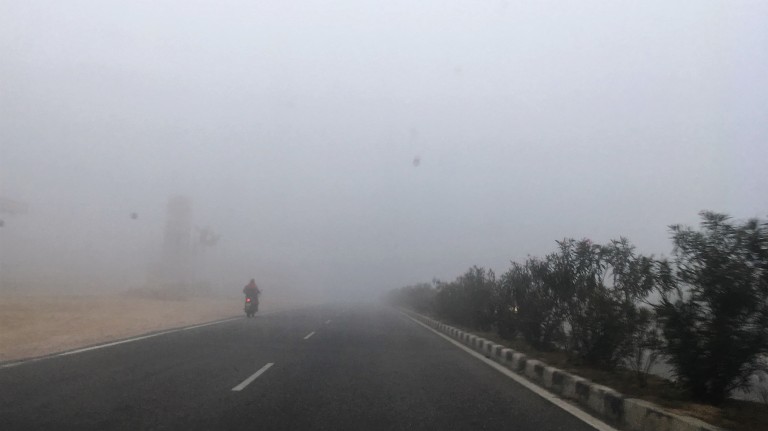 The drive to Chennai was very easy thanks to some excellent roads and thin traffic. We reached Chennai by 4:15 pm and the pre-booked OYO room at 4:45 or so. After a short walk in the area, we went to the marriage reception. Komala enjoyed the interesting presentation of dolls, flowers offered to guests.

A short video that I shot during the reception can be watched here . The reception had an array of interesting dishes and being served on the table was an honor.

After a brief stay of the marriage itself in the morning, we proceeded to Trichy and reached at about noon time. At this time, the hotel staff mention that the Ranganatha Swamy temple at Sri Rangam would be closed now. So we rested and reached temple at 3:40 pm. Despite a ₹250 per head special darshan, the queue was long and I could barely manage a 5 second glimpse of the Lord. It was a massive idol of lord, Vishnu in a sleeping posture. By the time I saw the face away and wanted to move my eye-sight towards the legs, I was pushed out by the security. Most temples in Tamilnadu have lunch break between noon and 4 pm. These being very significant temples, and most Tamilians perhaps being extra pious, queues were long in most temples visited.

Ranganatha Swamy temple Sri Rangam is the most significant temple for Vaishnavites. The second in significance apparently is Balaji temple at Tirupathi and the third in place was Sarangapani temple in Kumbakonam. With this tour, I completed seeing all of them. The Sri Rangam temple was huge. The right word perhaps, is ‘massive’. It is unbelievable how they were able to build such large structures with less available technology, as believe now. Granted, there could’ve been many elephants. Even after considering that, it is unbelievable that the constructions were so large. Obviously no cement or concrete, and even the so-called limestone based mortar doesn’t seem to have been used a lot. The way I understood was they used this wonderful concept of gravity. Each brick of stone was huge weighing several kilograms. When surfaced properly and accurately placed over another stone, there will be enormous gravity pull for the stone wall. It would so strong due to the heaviness of the stones, it would be impossible to move them even by a millimeter, be it by hand or a cyclonic thunderstorm. The key to the strength of the wall is the absolute accurate in placement of stones one over the other to maintain a very accurate gravity. The heavier the stone, the more stable is the wall. Simple concept. Just needs a careful implementation. These walls are now capable of holding tightly an even heavier roofs, again made with large rock slabs. What a construction! It was stunning. The temple area was so large with series of temples of other deities around the periphery, that we left at 8 pm. An over 4 hours within just one temple!!

A few of pictures below but a more representative collection for this temple can be watched here.

Closer to the Ranganatha Swamy temple was Jambukeswarar temple of lord, Shiva. This temple is one of the five pancha bhoota linga temples in the country. Here lord, Shiva represents jala tattva of the five. (The other four are Sky or Space at Chidambaram, earth at Ekambareswarar temple in Kanchi, Vayu at Srikalahasti and Agni at Thiruvannamalai). Inclusive of this tour, I have seen all of them now. The Jambukeswarar temple is no small temple either. It was huge with so many other temples within. You don’t see Sivalingam literally in water. Instead it is on a floor under which apparently there is river water. When asked, the priest would hit the gaps between tiles with a knife to show the water underneath sprouting up. The place does feel VERY divine. A representative picture can be seen below. It being late in night already, I couldn’t shoot too many good ones.

There was rock fort temple built over hillock that I didn’t care to visit in this tour, but saw it during my early morning walk the next day.